A Garbage Collection mechanism is provided in many languages. Thus its internal mechanism or logic might differ from language to language. But the main idea is the same for all. In this article, we will have a deep look at the internal dynamics of the Garbage Collection process in the .NET environment to gain a better understanding.

Garbage Collector needs to build an object tree to find unused objects and reclaim the memory occupied by those objects. To build this object tree, it needs some information about the executing program such as static and local variables, GC Handles, or F-Reachable queue which we call ‘Root Objects’. We are going to look into the details of the ‘Root Objects’ in part 2 of this series.

The static and local variables are provided to the Garbage Collector by the JIT Compiler. As the above figure shows us what the JIT compiler does and how it takes place during code compilation. The main job of the JIT compiler is to take the half compiled code (IL Code) by the compiler and compile it to machine-specific code. During this compilation process, it provides all variables (local and static) to the Garbage Collector to help build the object tree that it needs to do its job.

The Components of the Garbage Collector

The Garbage Collector consists of five components and the first of these components we will look at is Generations.

It is the memory region where all new objects are created in. Relying on the idea that new objects are expected to die sooner, the Garbage Collector performs on this region frequently. The size of this region is limited to between 256K and 4MB. As additional information, Gen-0 refers to the L2 cache of the CPU. The Gen-0 collection is a rather quick operation since it is small.

Survived objects from Gen-1 are promoted to Gen-2. Objects in this region are considered old objects and they won’t be collected soon. That’s why the Garbage Collector rarely performs in this region. The size of this region is not limited. It can use the entire memory space of the .NET process. Therefore, the memory size might be up to 2GB on a 32-bit system and 8TB on a 64-bit system.

Apart from generations, a Large Object Heap is a region in memory that stores object larger than 85K. It can be considered a part of the Gen-2 region. Survived objects in the LOH are not compacted which means the LOH becomes fragmented over time.

The lack of Gen-1 is a Mid-life crisis. A mid-life crisis occurs when temporary objects that should have been collected in Gen-1, are prompted to Gen-2 and die shortly afterward.

During full garbage collection, Garbage Collector has to pass through all objects in the heap. This process is very expensive and might have a big impact on system resource consumption. 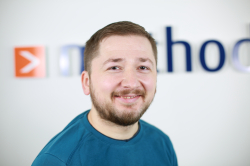